Sanskriti Samvardhan Mandal (SSM) is a village based voluntary organization established to educate and empower the deprived rural people. In the year 2005, SSM has launched a project titled “SAGROLI SUNRISE”.  Sagroli Sunrise is the carefully designed sports project with specific objectives.  It was realized that the strength and commitment of the rural youth is far more competitive compared to the urban counterparts. The rural youth could bring laurels to the nation in sports if whatever they need to hit the target is provided.  Currently there are 34 children in the programme. These children study in SSMs schools and they are selected through a physical test conducted by the sports coach. They are trained by a special coach (only running) and participate in various marathon events including the Mumbai Marathon. These children stay at SSM campus and undergo a workout every morning & evening. They are provided special high protein diet. The children age from 9-18 years. Some of them continue to be supported through a free vocational training and continued sports training up to the age of 25 years.

Your donation of Rs.4500 will be used to sponsor nutritious diet of an athelete getting trained at SSM.

The diet plan is as follows : 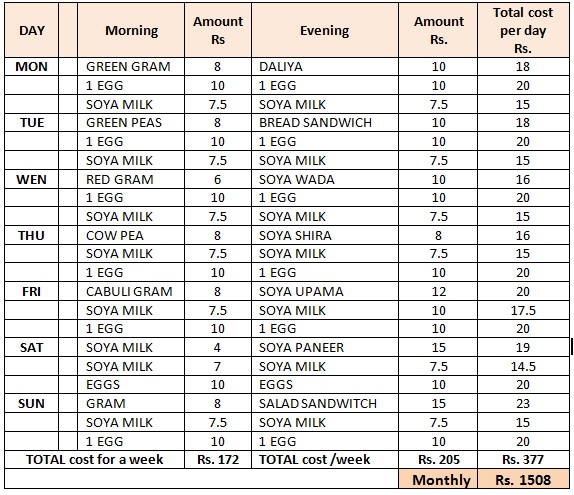 Sanskriti Samvardhan Mandal (SSM) is a social organisation located at Sagroli village in Nanded district, Maharashtra. Education has been SSM's principal activity since its inception in 1959. SSM is engaged in sustainable rural development through following activities : 1. Education : SSM runs one of the largest rural residential schools in India, imparting school education to about 4000 rural boys and girls. The school is well known in the Marathwada region because of its Quality Education. Many small projects are initiated for improving the quality of teaching and learning. The school received Dalit Mitra Award by Hon. President in 1992. The other educational initiatives of SSM are 2. Utkarsh Vocational Training Center : Utkarsh Vocational Training Center was established in 2009 with an objective to motivate the school going children towards job oriented courses and to equip the rural unemployed youth with technical skills. The training emphasizes on life skills and value education. The youth, trained at the center, either start their own business or join the respective industry. The training center won the Platinum Jubilee Award by IMC for Employment Generation in 1988. 3. Sagroli Sunrise : The sunrise project started in 2006, aim to promote rural athletes. The students who received support through the project have bagged many prizes in many athlectic events at district and state level. The project was awarded Real Heroes of the Nation Award by CNN IBN in 2006. 4. The Village Knowledge Center : Established in 2004, The Village Knowledge Center has been empowering the rural people with power of ICT. The project won the best VKC award by Microsoft in 2009. Other initatives by SSM: Annual report of SSM for the year 2012-13 Annual report of SSM for the year 2013-14
Story of Hope 1 : Rao Kamble, a backward class girl, was dwelling in Sagroli village. Her father used to work day and night for livelihood. She lost her father due to illness at the age of 10. Her mother became completely helpless and was unable to bring up the family. Being the eldest among 6 sisters, she had to quit her school and start working as a housemaid to support her family. SSM provided her free education with all the study material up to SSC. After her SSC exam, she expressed interest in pursuing Assitant Nursing course offered through SSM's vocational training programmes. A generous family from Sagroli village agreed to support her with the course fee. She successfully completed the course with earnest and active participation. Now she is working as a full-time Assistant Nurse at the Champaben Nanalal Hospital. She is not only an independent person but a financial support to her family. This change in a rural girl has enhanced the economic condition of her family. Her example proved to be helpful in spreading the importance of vocational education among the community, motivating more deprived youth to join the centre. Story of Hope 2 : In 2008, the government has constructed check dams in the villages for water management in Sagroli village. But there was no provision to oversee maintenance of the check dams and even the farmers/villagers neglected taking care of it. Eventually, the check dams became non-operational. The water ways were blocked to such an extent that looked like there never had been a check dam. SSM took the initiative and conducted a survey to explore the issues and current situation in the villages. SSM explained the solution and benefits of renovating and de-silting the check dams to the villagers. The intervention appealed to the villagers and they agreed to help in completion of the work. SSM renovated the dam, made waterways clear by digging and de-silting. This resulted in an upswing in livelihoods of the farmers. The villagers were benefitted with increase in agricultural productivity, water level, and fodder for animals and milk production. Over a the period, the fully working check dam helped villageer seek sustainable income generation opportunities.